We report efforts and achievements for the environmental load in FY 2019 indicated in the page of "Environmental Aspect in Corporate Activities."
The following report covers TAIYO YUDEN CO., LTD.: six sites, and its domestic and overseas consolidated subsidiaries.

We report the result of compliance and monitoring at each site in FY 2019.

Results of Efforts to Reduce Greenhouse Gases and Energy Consumption

Efforts on Indirect Emissions Other than from Energy Use (SCOPE 3)

We strive to reduce environmental effect on biodiversity while coexisting with nature, and we use the 3Rs (reduce, reuse, recycle) to reduce waste and make effective use of water resources.

G8: Average Water Use Per Unit
(results compared to target)

The tanks for temporarily storing plating liquid used during production processes are made of metal, which causes energy loss due to heat radiation.
We have implemented a countermeasure by measuring the surface temperatures of the tanks using thermography to identify tanks with high temperatures and covering them with insulation. This countermeasure suppressed excess heat radiation from the tank surfaces, resulting in the reduction of energy loss.
The amount of GHG emissions reduced as a result was 4t-CO2e per year. 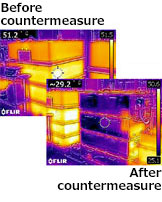 We are promoting the use of renewable energies as a response to climate change. Currently, solar panels are installed in four sites to generate power. In FY2019, Scope 2 GHG emission was reduced by 452 t-CO2e per year by generating 910 MWh.

Water usage was reduced by recycling water discharged from the intermediate processes of the water treatment facilities in the cooling tower for air conditioning.
The amount of water reduced was 23,000 t per year.

Piping for sending recycled water to the cooling tower

Since FY2007, TAIYO YUDEN has participated in a forest maintenance project run by Gunma Prefecture, involving corporate volunteer work. Every year, volunteers from TAIYO YUDEN have helped to maintain the "Taiyo no Mori" forest, joining with prefectural government employees to trim underbrush and thin trees.

The crayfish is included in the list of designated Invasive Alien Species because they have disruptive effects on Japan's indigenous species including aquatic organisms and plants.
NIIGATA TAIYO YUDEN leads a biodiversity conservation activity every year in which employees and their family members exterminate crayfish. They also exterminate alien plants such as daisy fleabanes.